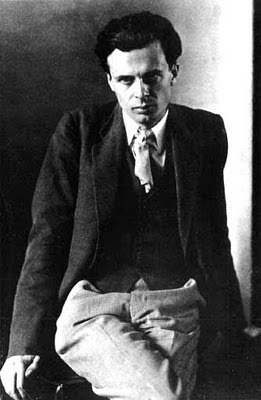 "The most transporting landscapes are, first, those which represent natural objects a very long way off, and, second, those which represent them at close range.
Distance lends enchantment to the view; but so does propinquity. A Sung painting of far away mountains, clouds and torrents is transporting; but so are the close-ups of tropical leaves in the Douanier Rousseau's jungle. (...)

When we look very near or very far, man either vanishes altogether or loses his primacy. The astronomer looks even further afield than the Sung painter and sees even less of human life. At the other end of the scale the physicist, the chemist, the physiologist pursue the close-up, the molecular, the atomic and subatomic. Of that which, at twenty feet even at arm's length looked and sounded like a human being no trace remains.

Instead of men and women playing their fantastic tricks before high heaven, we are asked to consider the lilies, to meditate on the unearthly beauty of "mere things", when isolated from their utilitarian context and rendered as they are, in and for themselves. Alternatively, the non-human world of the near point is rendered in patterns. These patterns are abstracted for the most part from leaves and flowers, and are elaborated, with recurrences and variations, into something transportingly reminiscent of the living geometries of the Other World."
Aldous Huxley, Heaven and Hell, 1956 p.93-96
Posted by Sabrina Ratté