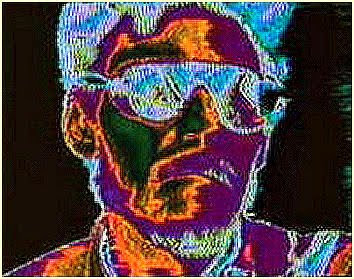 "Most of his imagery [was] generated by audio equipment that [was] connected to the video gear. He talks about his latest work:

"...I've been doing some things sending an audio signal into a machine we have at the Center called a mixer, a colorizer, and a keyer. It takes audio signals from the oscillator inside the audio synthesizer and changes them into bands of various widths and expansion on the screen and puts color in , so the color gets mixed in gorgeous arrays. I've even begun to use the camera and to mix audio created images with camera images. The audio things will go right through the camera images and make strange new colors."

His idea is to make a work that is totally integrated aurally and visually. He feels the two should complement each other completely. The problem is to balance the work so that both visuals and audio are interesting. He explains: "in a lot of these experiments, I'm not even putting the sound on because the sound is dumb. The thing about sound is, it's so complex that when it's represented in images, the images are so complex, they become chaos. Whereas the simplest sounds make the clearest images...There's a lot of activity in sounds and it becomes blurry visually; it looks like noise. So the simplest sounds, like single tones, make the best images...working with sounds you actually want to use and save is a problem."