It's International Women's Day today. I thought it would be a good time to share where the name of this blog comes from while featuring a woman artist.

"I have been using the computer to make pictures for most of my career as an artist. When anyone asks me how I became involved with computers my retort is, "I married into it." My husband, Jay, teaches in the Computer Science Department at the University of Minnesota. Most of what I have learned has been through osmosis.

As a grand student of Hans Hofmann having studied painting with Peter Busa it seems strange, even to me, to be involved with anything mechanical. My art studies were firmly grounded in abstract expressionism—dripping paint, house paintbrushes, and the attitude 'I know nothing.' It is quite a leap to a computer, a plotter, and conscious decision making. However, the change has been gradual and I feel I am combining both attitudes, abstract expressionism and constructivism in my work. 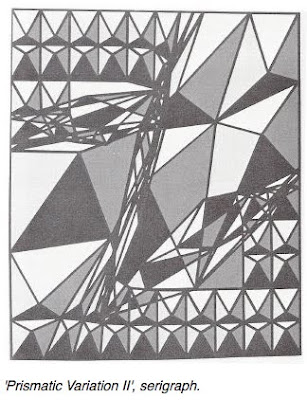 My first encounter with computers in producing art was to experiment and create graphics with a program that already existed. I drew and shaded pictures on a cathode ray tube using a light pen attachment. The program had features which made it superior to drawing by hand. But after 6 months I was frustrated with it. Everything I drew so freely on the scope was ultimately resolved into a grid. This dissatisfaction, coupled with the fact that I now knew more about how computers worked, led me to think of my own idea for a program. I had had a rubber dollar bill when I was a child. I loved to stretch and distort the image on it.
My idea was to use the computer to simulate a rubber sheet and to stretch any patterns I wished to draw. Initially my patterns would be hard-edge, constructivist in style. But after distortion they would have the lyrical quality of abstract expressionism imparted to them. I have explored several patterns with this program, a linear one, one dealing with mass, a 3-dimensional projected figure, etc. Each series is unique, comprises a new style, and even requires its own method of stretching. I have used this 'stretching' program to create graphics and paintings. I am about to begin to use a variation of the program which incorporates transformations to make film animations. In addition, having conceived of one idea, I find myself bombarded with others. Recently, for example, I modified my stretch program to incorporate the idea of attraction and repulsion. 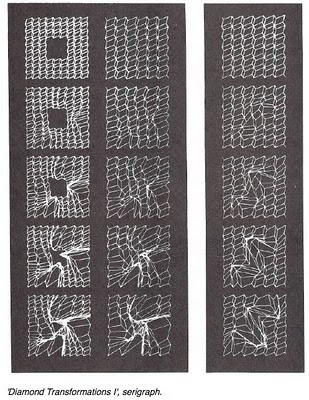 I find that using the computer I do not have to give up my traditional role as artist. The machine acts as a multifaceted tool which I control. When I began to use the computer I had no knowledge of programming. I have since taken a course on Fortran. This gave me an understanding of how the machine processes information, thereby giving me more control over my work. I do not actually code my programs, but I know what I can ask for and how to ask for it.

It is the option to create one's own work tools which, in my mind, makes computer art unique. A new role is now open to the artist in addition to the traditional one of making objects. He can create programs for himself, other artists, and perhaps even for the public. The impact of computers on art in the future will be greater because more artists will have access to machines. I have no doubt that the public shall also have access to computers and certainly more leisure time. If computer art is to become 'the public art' it will not be because graphics can be produced cheaply and en masse as some have predicted. It will be 'the public art' because the public will be generating works of art with programs that artists have created. 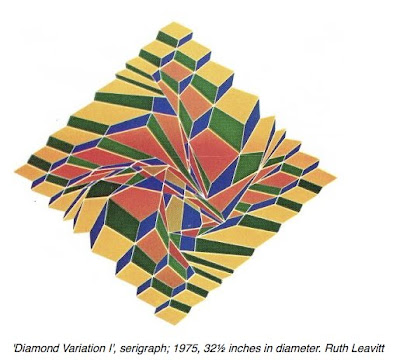 As long as I have access to a computer, I will continue to use it. The machine allows me to create artworks that would probably be impossible to produce in any other reasonable way. With the aid of the computer I can now explore areas which artists in the past only thought possible to dream about."

Thanks for showing this beautiful work. It reminds me of another great female pioneer of computer art, Vera Molnar (whose work you certainly know).

Ho yes! Vera Molnar's work is quite beautiful too!