I was asked to participate in an interesting project for Film POP (part of POP Montreal festival) organized by Kier-La Janisse. The project consisted in making a video or a short film with the music of an artist performing at POP Montreal this year, and to make this piece in the same spirit as the obscur genre called Auroratone. Here is a brief description of what the event was all about and what an Auroratone is:

Here is the only known surviving Auroratone film, When the Organ Played 'O Promise Me,' which is in the private collection of Gus Martens -- himself an amateur cinema enthusiast and filmmaker, who at one time earned side-money projecting films at the Creedmor Psychiatric Center, in his native Queens, New York.

And, well, here is my own Auroratone, thanks a lot to Tim Hecker for giving the permission to use his music.

In recent years, amazingly few books on contemporary stained glass have come onto the market, and of these hardly any cover specifically secular work. This absence of published material has allowed the myth to continue, even in the architectural world, that stained glass is still primarily a neo-Gothic, ecclesiastical medium. This book sets out to explode that myth. It seeks to create a new image, a new sense of what stained glass is about in the modern world. 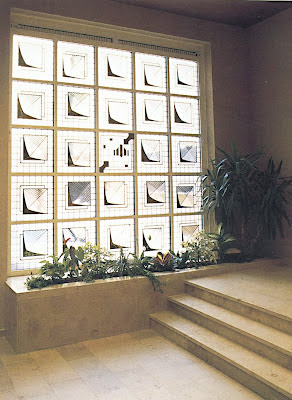